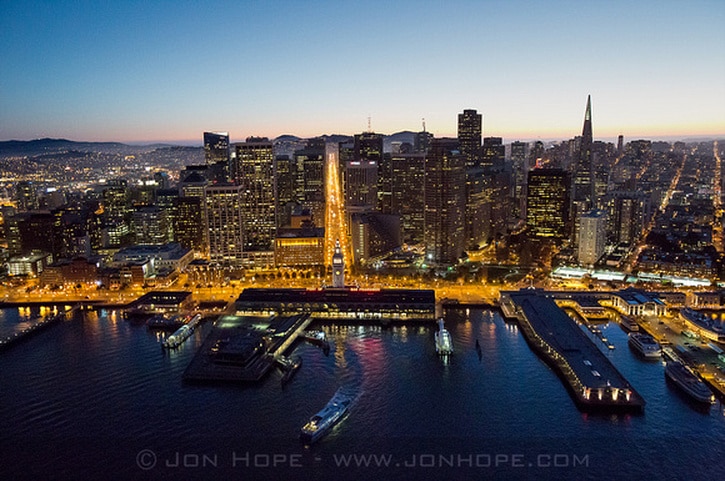 Jeff was introduced to drones about a year and a half ago after seeing people post aerial footage online. “When you put a drone up there you get an entirely new perspective. It’s so cool to be able to push the boundaries and get images you couldn’t have gotten otherwise,” he says. Jeff: I was shooting from the helicopter, doors off, by the Empire State Building. My mom was freaking out because we were going over NYC without the doors or being harnessed in, but I wasn’t nervous at all. I was shooting a picture of the photographer in the copter for an ad. I called my wife as soon as I landed and told her it was better than sex (laughs). That being said, you have all kinds of challenges stabilizing and with cameras, and you’re hearing the clock ticking and the dollars adding up—at 3,500 bucks an hour you better get it right! You can buy an entire drone for $1,299 (which is equivalent to one hour of jet ranger time). Jon: I was lucky because I did it in high school and once for a college project. I went on to do stuff for the military, and then worked for the startup, and they paid. I learned the ins and outs, which included learning by making mistakes at someone else’s expense—it’s very hard. It’s an expensive thing for the shots not to come out. What are the regulations for helicopters and drones?

Jon: One of the big differences between helicopters and drones is that helicopters don’t have the same height restrictions. Drones can only fly out to 400 feet above the ground, and if you’re doing this as a photographer for commercial use you need a special exemption from the FAA, which is expensive. So I’ve been looking at it myself. I bought a little drone to try out at my house and in my backyard to learn how to do it, because there are plenty of times where I would love to be able to get something in that altitude range and not have to have the expense of a helicopter or have to go to an airport.

Jon: I’ve paid anywhere from $600-2,000 or more an hour, and when you’re in New York, you probably have to have a twin engine helicopter, plus you need specialized equipment. I have a gyro stabilizer and that alone is $2.5K.  I have a specialized harness as well, and a bunch of safety equipment, so it gets pricey. Plus you’re still at the mercy of the weather and the skill of your pilot. I’ve had to interview the pilots, and I always get excellent pilots, but if I’m using a drone I’m likely to be reliant on myself, which may not be quite as good (laughs). Jeff: I’ve flown drones enough times that I’ve gotten pretty confident, but it does mean that you’re having to fly and shoot at the same time vs. having someone who is going to be doing the flying for you.

Jon: Exactly. Helicopters are big, flying tripods. You know you can hopefully get it in the position you want, and then as long as it’s safe for the pilot to fly it then it’s pretty easy to maneuver around to get the shot you want. You can get closer or higher or lower easily and quickly, but there are definitely places that aren’t safe. When I used to shoot golf courses, some of the greens had lots of trees, and we were doing low-level photography. For those areas there is no way you could get a helicopter in it; it wouldn’t be safe because there’s too many trees. But you could do the same shot with a drone, so there are pros and cons to each.

Jeff: For the drone I do 20 minutes at a time. I’ve got three batteries, and I just throw it in the back of the car in case I go somewhere interesting. I remember one time I was driving up Highway 101 and I thought ‘I wonder if they’re tearing Candlestick Park down?’ Sure enough, they were halfway through the teardown. I went over there and flew the Phantom 3 over it. It was the coolest thing. I was in the car, threw it up, shot for about 15 minutes, and then got back in the car and kept driving. It’s not like a helicopter, where you’re planning way in advance and dependent on the weather, and all of that.

Jon: It gets stressful having to keep checking on the weather for helicopter photography, and if you go up when the weather’s not perfect. With a drone, bad weather is not the end of the world.

Do you strap your camera to the drone?

Jeff: I fly the Phantoms and the Inspire, which are different levels of drones. All have built-in cameras, so I don’t have to strap a camera to it. There are models where you can do everything, from a GoPro to a 5D Mark III or even big cameras, but the reason I like the built-in cameras is the quality is still really good (and getting better every month). God forbid, I dunk a Phantom into the ocean; that’s $1,300. If I have a big octocopter with a big DMark III and a good lens, then I’m dunking $10,000! A drone is like one hour of helicopter rental, right Jon? Jon: Yeah, there doesn’t seem to be a middle ground. You either pull the trigger on an expensive helicopter or you go the drone route. You need to consider quality and expense vs. convenience, and a lot of it depends on what your clients want. Jeff: The challenge is that the word drone has a negative connotation because of military use and all that. One way to combat that is to call it an aerial camera. Part of it is the people who are flying them. I’ve seen some pretty close calls. If a Phantom were to crash into someone, it would cut them. An Aspire or bigger drone could do some serious damage, so you want to be careful. I do fly in areas that are populated, but I’m careful about where I fly it, how I fly it, and when I bring it into land I bring it and hold it. A lot of it is common sense, just like with any tool.

Jon: The FAA and other giant government bodies are quite slow at understanding the use of drones and drone technology… other countries are further ahead.

Jeff: And that’s an issue. Right now, the FAA is so far behind. Just DJI alone is selling tens of thousands of drones. They’re going to have to legislate this and figure it out.

Jon: It’s the same for the full-size helicopter. I’ve spent so much time in the backseat that I wanted to learn how to fly. I didn’t realize it would be time consuming and incredibly expensive. For me it was a big achievement to be able to get a license, and in some ways it makes me a better aerial photographer because it helps me understand the helicopter a lot better and what it can and cannot do. Are there things you can in the helicopter that you can’t get in a drone? How should interested photographers try helicopters out?

Jon: If you’re a photographer who wants to try aerial photography, the best way is to go with one or two other friends who also want to try it and split the rental. Or you can go to Hawaii: There are a couple of companies that do doors-off tours. I took my wife on one when we were in Kauai—you can take a camera up in there and not have doors, which is a cool and easy intro.

Jeff: The great thing is if I want to take a drone to Hawaii and I want to pop it up for six hours, I just keep recharging my batteries and going out and shooting. You pick the time of day you want to go. I can wait depending on weather and enjoy the freedom of that. Do you do video?

Jeff: I’m a still photographer; I don’t do video. But when I fly the drones, I do YouTube videos. Some of them have 40,000 or 50,000 views, so I become a video guy… and I just use iMovie to do the editing. Because of the drones, I’ve been doing video.

Jon: I think that’s where drones excel, to get close to the quality of video that you could get with a helicopter plus using all the crazy mounts, which are super expensive to rent and attach to the helicopter. I’ll be excited and frightened at the same time when the picture quality catches up to the 5D Mark IIIs. 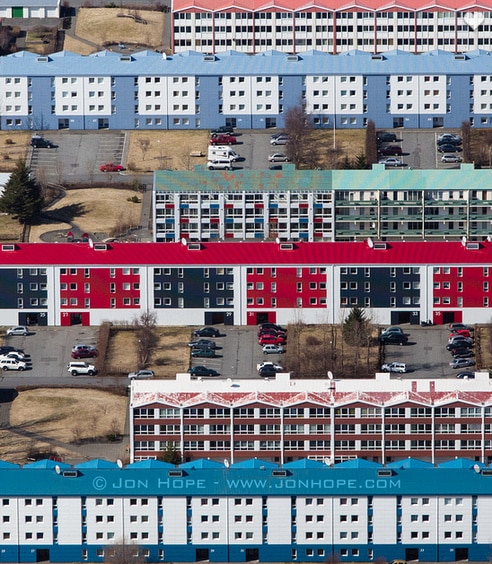 Jeff: And it’s going to. They keep improving the cameras on these drones. It’s going to conflict with what you’re doing, maybe not medium format for a while but clearly 4/3 and those types of cameras.

Jon: There’s one thing you don’t get with drones—you don’t get the smell of the jet fuel (laughs) and I miss that. And the turbine.

Jeff: And the wind and cold weather up there, and everything else… The experience of flying a drone is nerve-wracking, but there’s a rush doing it because you’re looking at the screen. It’s real time.

Jeff Cable is a Zenfolio Pro Team member and has been shooting the Olympics since 2008. As a sports and event shooter, Cable also photographs Bar Mitzvahs, weddings and portraits. He resides in Saratoga, CA. Read more about Jeff on his website: jeffcable.com. Jon Hope is an award-winning professional photographer with more than 25 years of experience in portrait, location and aerial photography. He has shot for Newsweek, The Times (London), The Telegraph (London),  Der Spiegel, Financial Times and countless other publications. Read more about Jon on his website: aerials.jonhope.com.